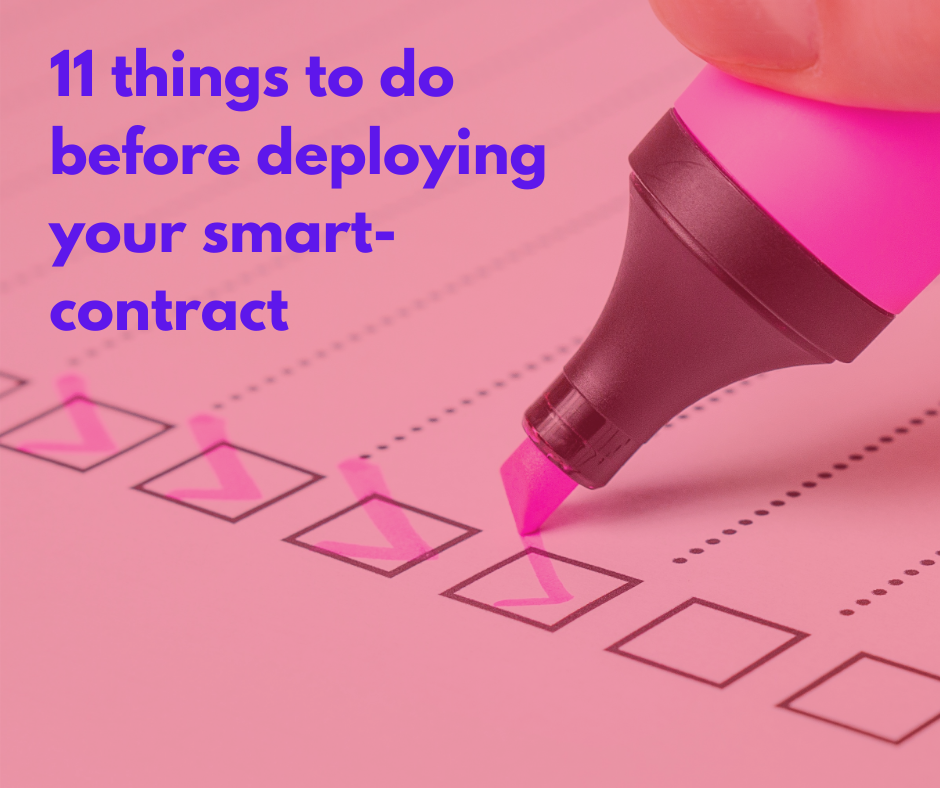 You’ve just finished the development of your EOSIO smart contract and you’re ready to release it for the whole world to use. But before you do, take a step back and make sure you have all the bases covered. Deploying your contract to production is a big step with (literally) a lot at stake and can be a scary and daunting task. Especially in the blockchain world, where one regularly reads about smart contract hacks involving millions of stolen funds.

That’s why we’ve put together a checklist on things you should do before releasing your smart-contracts.

Make sure that your contract follows coding best practices. This usually leads to cleaner code which in return leads makes spotting bugs easier.

If your contract has certain code paths that are only used for testing make sure they are removed or turned off by defining C++ macros for production builds.

You never know if and when something will go wrong with your contract. Therefore (depending on your project) it may make sense to add a pause button that will stop all your other actions from executing.

Code rarely works perfectly the first time. The best way to catch bugs early is by writing unit tests while developing your smart contract. For EOSIO smart contracts our tool Hydra can help you with this.

5) Beta-test on a testnet

Before deploying your smart contracts to production on a main-net, roll them out to beta testers on a test-net. You'll get valuable feedback that isolated unit tests cannot provide.

Running automated vulnerability scanners on your smart contract code doesn’t require much effort and results in a fast security check that can detect common vulnerabilities.

EOSIO account permissions can be complex. Double-check that your desired permission structure is set up on all the accounts and that you used fresh private keys.

When working on a new feature or maintaining the contract, its very important to know the exact code that is currently deployed. So tag the contract version in git.

11) Be careful when you deploy

It’s advisable to deploy early in your workday so that there’s enough time to test your system on production and fix potential problems that might occur.

Pushing the button to deploy your smart contracts to production doesn't have to be a scary task as long as you are sensible and follow pre-deployment best practices.

For a more in-depth look into the pre-deployment best practices download the PDF version here.